The Exotic Shorthair is a breed of cat developed to be a short-haired version of the Persian. The Exotic is similar to the Persian in many ways, including temperament and conformation, a flat nose and face with the exception of the short dense coat.

In the late 1950s, the Persian was used as an outcross by some American Shorthair (ASH) breeders. This was done in secret in order to improve their body type, and crosses were also made with the Russian Blue and the Burmese. The crossbreed look gained recognition in the show ring, but unhappy American Shorthair breeders successfully produced a new breed standard that would disqualify ASH that showed signs of crossbreeding. One ASH breeder who saw the potential of the Persian/ASH cross proposed and eventually managed to get the Cat Fanciers' Association to recognise them as a new breed in 1966, under the name Exotic Shorthair. 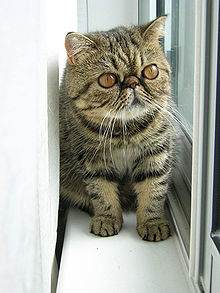 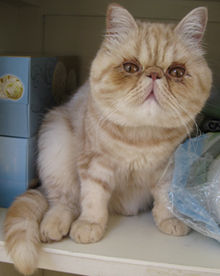 Exotic Shorthairs have a gentle and calm personality reminiscent of the Persian, but are generally livelier than their longhaired ancestors. Curious and playful, they are friendly to other cats and dogs, but they don’t like being left alone and need the presence of their owner. They tend to show more affection and loyalty than most breeds and make excellent lap cats. Their calm, steady nature makes them ideal apartment cats for city dwellers.